Here, we will go through the summary of the lesson “The lost spring” in class 12th describes the hapless condition of children not able to enjoy their cheerful childhood due to terrible socioeconomic backgrounds.

Young happy children lack the opportunity for schooling. They are forced to join the tiresome labor world early in life. The author Anees Jung raises a voice to eliminate child and forced labor. She wants every young child to be able to enjoy the spring days and have fun. The call is to put an end to the exploitation of children. 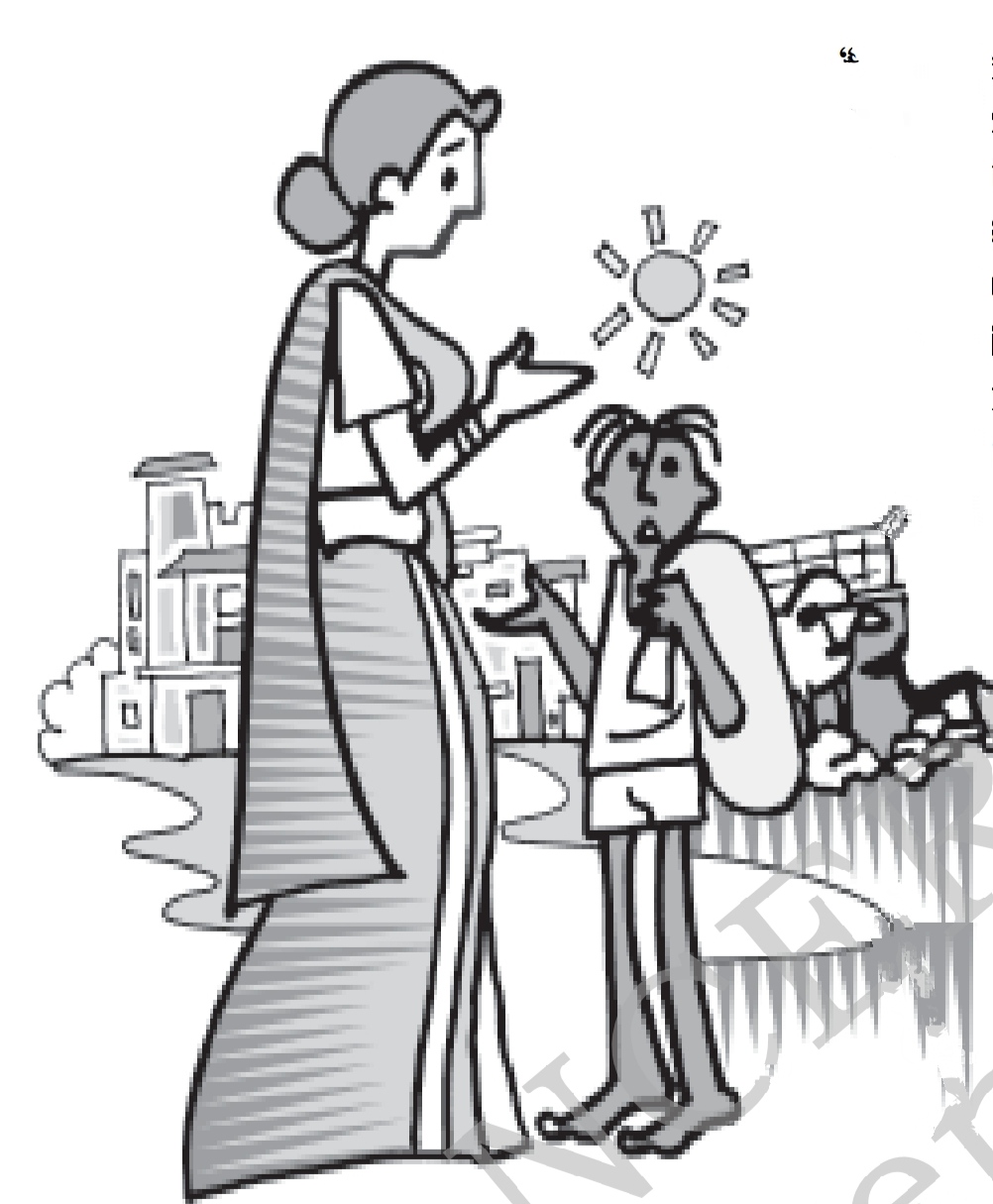 Anees Jung (born 1964) is an Indian author, journalist, and columnist for newspapers in India and abroad, born in Hyderabad and hails from an aristocratic family her most known work- Unveiling India was based on the lives of women in India, noted specifically for the depiction of Muslim women behind the purdah.

Her other known works; are Seven sisters, the night of the moon, breaking the silence, the lost spring, etc. Now we move ahead towards our next section focussing on the summary of the lost spring.

The very first paragraph tells us about the author’s idea regarding the life of poor and hapless rag pickers from Dhaka. They settled around the area of Seemapuri.

They had to move to big cities after their crops failed and were starving to death. But the reality was more painful for them and they had to face uncertainties as they lack proper resources.

Their means of survival is “garbage”. For children it is a wonderful thing food is more important for survival and sometimes they even find gold from it.

They do these kinds of jobs doesn’t, which means they don’t have ambitions or desires, what they lack is proper resources to pave the way; to make it happen. Later on, Saheb joins a tea stall where there is a possibility to earn 800 rupees. However, the condition was full of misery.

The second part revolves around the life of Mukesh who belongs to the family of bangle-makers. Firozabad is famous for its glass-blowing industry where 20,000

Children are engaged in this same work. There no one understands the importance of cheerful and salad days. No one respects labor laws, instead, all work under depriving conditions welding colored glasses into circles of bangles.

Then we come across a young girl, Savita drab in a pink dress, sitting along with an elderly woman. She is also engaged in the same work of welding pieces of glass. Her hand moves in a robotic manner unaware of the salubrity of the bangles.

The old woman sitting beside me has never enjoyed a full meal in her entire life. His husband knows nothing except welding pieces into circles of a happy life. He has only made a roof over them.

All of them work near the hot furnaces and as soon as they become adults they lose their eyesight from polishing the dust from glass bangles. Under the pressure of debt, they find no way but to end in this trap.

Unable to dream, they only talk about apathy, greed, and injustice. But Mukesh is different, he has big dreams. Dream of becoming a motor mechanic. The garage is far away but he has a strong will to walk.

Two different worlds seem to be stigmatic where everyone is caught in poverty and bagged down the same on their children’s shoulders. Unwillingly, most of them accepted like their fathers but the author is elated to see the audacity on the faces of Mukesh.

Q1. What is Saheb looking for in the garbage dumps? Where
is he and where has he come from?

Saheb is looking for coins, rupee notes, and any other useful objects in the garbage dumps. Saheb and his family have migrated to Seemapuri, a slum area on the outskirts of Delhi, looking for a source of living after they were uprooted from their native village in Dhaka, Bangladesh.

Q2. What explanations does the author offer for the children
not wearing footwear?

The author comes across many shoeless rag-picker children in her neighborhood. According to the, one explanation for this habit of remaining barefoot is that it is a tradition among the poor children of this country. However, the author quickly mentions that calling it a tradition could be just a means of justification for utter destitution.

Q3. Is Saheb happy working at the tea stall? Explain.

Saheb is not really happy working at the tea stall because working for a master meant sacrificing his freedom and his “carefree look”. Even though the job at the tea stall pays him 800 rupees and all his meals, he seems less contented than before. The weight of his master’s steel canister seems heavier than his rag-picking plastic bag.

Q4. How, in your opinion, can Mukesh realize his dream?

Mukesh was different from the others in his community. By daring to dream, he has already taken the first step towards a big change. He wants to become a motor mechanic and drive a car. He can realize this dream with determination and hard work. There might be many obstacles on his way but strong willpower will help him move the way to success. The fact that he is willing to walk a long distance in order to learn the vocation, underlines his firm resolve. The only thing left for him to do is to make that first journey to that garage and request the owner to take him in and guide and
direct him on his journey as a mechanic.

Q5. What makes the city of Firozabad famous?

Firozabad is famous for its glass bangles. The place is the centre of India’s glass-blowing industry

Q6. What could be some of the reasons for the migration of people from villages to cities?

There are many factors that cause the migration of people from villages to cities. Some villagers voluntarily move to the cities in search of jobs and better civic and health facilities, etc. Others are forced to migrate when natural disasters like floods, storms, drought, famine, etc. destroy their houses and properties. History has records of large-scale migrations caused by wars. Also, many villagers who are better off than others manage to send their children to study in the cities. In the lesson ‘Lost Spring’, Saheb and his family migrate to Seemapuri from Dhaka after their houses were destroyed in the storms.

Q7. Would you agree that promises made to poor children are rarely kept? Why do you think this happens in the incidents narrated in the text?

Yes, the promises made to poor children are seldom kept. Often, they are not taken seriously or have been made on the pretext of retaining a child’s fancy for something. This keeps the child hoping for a better possibility till he/she realizes the truth. It is difficult for people to shatter the children’s dreams; while it is also painful to see these children thrive on false hopes given to them.
Once, while interacting with Saheb, the narrator ends up encouraging him to study and jokingly talks about opening a school herself. At that time she fails to realize that unknowingly she has sown a seed of hope in Saheb’s heart. She becomes conscious of her mistake when, after a few days, Saheb approaches her, enquiring about her school. Her hollow promise leaves her
embarrassed.

Q8. Mention the hazards of working in the glass bangles industry?

The impoverished workers in the glass bangles industry toil in potentially hazardous working conditions while welding. The furnaces they work in have extremely high temperatures and lack proper ventilation. Persistently working in low light conditions, without any protective eye gear, leaves them blind. Even burns and cuts are quite common. The workers are quite prone to ailments
such as lung cancer.

Q9. What forces conspire to keep the workers in the bangle industry of Firozabad in poverty?

The unfavorable social and legal systems, the deceptive middlemen, and their own sad destinies keep the workers in the bangle industry of Firozabad in perpetual
poverty.

Q10. Why should child labor be eliminated and how?

Child labor should be eliminated because it takes away from the child his childhood and the prospect of elementary education. Moreover, since child laborers are cheap, and consequently engaged in hazardous and dangerous employment, they are often vulnerable to mental and physical illness. In order to curb this problem, it is important to make education easily accessible. Apart from that, the parents must be made aware of the consequences of working in harmful environments. It is also important to make the public aware of the fact that child labor is a criminal offense
and is punishable under law. The government must ensure stricter child labor laws and that the offenders are punished. Q11. How is Mukesh’s attitude to his situation different from that of his family?

Mukesh belongs to a family of glass bangle makers in Firozabad. Even though the children of such families usually carry on their family profession, Mukesh wants to be a motor mechanic and drive a car. Unlike his family members, and others in his community, he has dared to dream. His grandmother’s words about the unbreakable lineage represent the attitude they have towards their situation in life. They believe that it is their destiny to toil as bangle makers. But Mukesh dreams of a
better and safer career. The resolute boy is willing to walk a long distance from his home to learn to be a mechanic, exemplifying the saying, ‘where there is a will, there is a way.

Q12. Carefully read the following phrases and sentences taken from the text. Can you identify the literary device in each example?
1. Saheb-e-Alam which means the lord of the universe is directly in contrast to what Saheb is in reality.
2. Drowned in an air of desolation.
3. Seemapuri, a place on the periphery of Delhi yet miles away from it, metaphorically.
4. For the children it is wrapped in wonder; for the elders, it is a means of survival.
5. As her hands move mechanically like the tongs of a machine, I wonder if she knows the sanctity of the bangles she helps make.
6. She still has bangles on her wrist, but no light in her eyes.
7. Few airplanes fly over Firozabad.
8. Web of poverty.
9. Scrounging for gold.
10. And survival in Seemapuri means rag-picking. Through the years, it has acquired the proportions of fine art.
11. The steel canister seems heavier than the plastic bag he would carry so lightly over his shoulder
Answer :
1. Irony
2. Metaphor
3. Antithesis
4. Antithesis
5. Simile
6. Pun
7. Pun
8. Metaphor
9. Metaphor
10. Hyberbole
11. Paradox

In a nutshell, we have provided you with a summary of the lesson “The lost spring” by Anees Jung giving thrust on the major issue of child labor and the pitiable condition of children working as labor.

They are deprived of their happy childhood days and throughout their life bogged down by the responsibilities of their family, forced to miss the joy of pre-teens. These children were denied schooling and basic necessities of life to nurture.

The author raises the issue to end child exploitation and bring the lost spring under their feet.