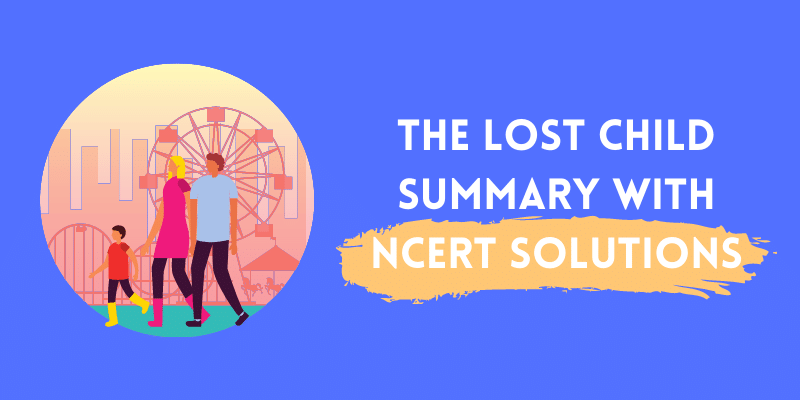 The lost child is the story revolving around a small child who gets lost in a fair while seeing a roundabout. The story is about a child who shares a bond with his parents and forgot all things when his parents were nowhere to be seen. Before losing them, he was constantly demanding balloons, flowers, sweets, and swings. But when he was picked up by a stranger and tried to offer everything which was refused by his parents, he refused everything and now wants his parents at any cost.

The Lost Child About The Author

The story has been written by Mulk Raj Anand, who was born on 12 December 1905 and was an Indian writer notably known for his works like the protest novel Untouchable, and other works like Two Leaves And Bud and Coolie. He was also the recipient of Padma Bhushan. Through this lesson, he explains that a person loses interest very easily in worldly pleasures as it can give happiness only for a short period of time. During the spring season, the village people came out to enjoy the fair. A child along with his parents was going to the fair and he was looking cheerful and happy. He seems to be attracted to everything in the fair and his father was scolding him. His mother was being a mediator trying to cool down the situation. They both try to divert his attention towards other things. But once again the child moved and lagged behind because his eyes caught other things.

Summary Of The Lost Child

During the springtime, the child goes to the fair with his parents and other people walked, some rode on horses and some came in bullock carts. The child was with his parents and was overjoyed and asking for different things like sweets, balloons, toys, etc. his father was scolding him and the mother became the mediator. The boy continuously asked for things and he was being scolded by his parents.

He has then attracted to mustard fields and dragonflies over them. The child tries to reach them but he is again called by his mother. He ran towards her call and then got stuck to see the dove and banyan tree. His parents again called him and distracted his imagination.

Soon the child reached the fair and heard the voice of a sweetmeat seller called Gulab Jamun and other sweets. The child was looking at those sweets with his mouth-watering. He asked for his favorite sweet barfi. The parents again scolded him and took him forward.

Then the child was fascinated by a flower seller selling garlands of Gulmohar. He wanted to buy one but again his parents took him away from the shop.  So, he moved on and saw one balloon seller who had various balloons on his pole. The child knew that he would again be reprimanded by his father. So he moved on.

The child then saw a snake charmer who was playing the flute (been) to the snake and it was dancing to his tunes. But he knew his parents would refuse him to go further so he went ahead. He then saw a merry-go-round and wanted to enjoy it, so once again he asked his parents that he wanted a ride and to his surprise, he didn’t get any reply.

The child was lost and he was crying bitterly and running here and there. A man heard his cry and lifted him up in his arms and tried to locate his parents.  He asked the names of his parents but he only replied he wants his mom and dad.

The Lost Child  Question and Answers

Q1. What are the things the child sees on his way to the fair? Why does he lag behind?

On his way to the fair, the child lagged behind because he was fascinated by toys, sweets, snake-charmer playing been, Gulmohar garland, a swing, etc.

Q2. In the fair, he wants many things. What are they? Why does he move on without waiting for an answer?

The child wants everything he was able to see on the way and constantly was fascinated towards colorful balloons, tempting sweets, a garland of Gulmohar flute of the snake charmer, etc. he asked again and again to buy these kinds of stuff and was refused by his parents. So, after that, he moved on without waiting for an answer.

Q3. When does he realize that he has lost his way? How have his anxiety and insecurity been described?

When he saw a roundabout and got attracted to it. He wishes to have a ride on it and asks his parents about it. His parents gave no response and after this, he realizes that he has lost his way. He started crying bitterly and ran to and fro to find them.

Q4. Why does the lost child lose interest in the things that he had wanted earlier?

He got lost in the fair and lost all his interest in all the stuff he wanted to enjoy earlier. Now he just wanted to reunite with his parents. He was feeling unsafe and now just wishes to have his parents by his side.

Q5. What do you think happens in the end? Does the child find his parents?

I feel he has found his parents at last and both of them must be having a sigh of relief. The person must have helped him to reunite with his parents. The parents have also searched him and left no stone unturned in finding his beloved child.

Q1. How did the mother distract the child’s mind from the toy seller?

The mother distracted the child by pointing towards the mustard field and the child also rushed to see and catch the dragonflies.

Q2. How was the child separated from his parents?

The boy was enraptured by everything he saw on the way to the fair. He was attracted to sweets, balloons, toys, mustard fields, and dragonflies. As soon as he saw a roundabout, he wanted to have a ride on it and asked for it from his parents and then only he came to know that his parents were nowhere and he had lost in the fair.

Q3. What happened when the lost child reached the temple door?

When he reached the temple door the people were jostling each other and he was knocked and pushed aside. He would have been squashed if he had not screamed at his highest pitch.

Q4. Who rescued the lost child? What did he offer to buy him?

The man in the temple rescued him safely. He carried him in his arms and tried to comfort him. He offered all the things on the way from ride on a roundabout to sweets and toys but now the child loses interest in all these worldly pleasures and just wished to reunite with his parents.

Q5. Parents were in a hurry to reach the fair but the child was delaying them. How?

The child was attracted to all the things on his way to the fair but the parents wanted to reach him early. Out of his innocence and enjoying all the pleasures of his childhood, he delayed his parents.

Through this lesson, the writer tries to explain that worldly pleasures give happiness for a short period of time. But the most important are the relations which remain until death. The child loses all his interest as soon as he was lost in the fair and he was unable to find his parents. He was now offered many things by the kind-hearted person but now he wanted his parents only.