We are also sharing some important diagrams of Sources Of Energy Class 10th to help the students with the crux of the lesson and be able to attempt the questions in the board examinations.

Biomass refers to those living and nonliving organic materials that can be used as sources
of energy in the form of fuel. Some examples of biomass fuels are wood, crops, and organic garbage. Biomass fuel is a renewable source of energy. Gas made from the anaerobic digestion of agricultural and animal waste is called biogas.

Biodegradation is the process of biological degradation of organic matter by bacteria and
fungi.
 A good fuel/source of energy
o That would do a large amount of work per unit volume or mass
o Easily accessible
o Easy to store and transport
o Economical

Factors to be considered for choosing fuel

 The ignition temperature of a substance is defined as the temperature at which the
substance starts burning. It is measured in °C, °F, or K.

 Non-renewable sources of energy are those that are consumed at a rate faster than that at which they are replenished. Example: Fossil fuels.
 Fossil fuels – Coal, petroleum, and natural gas

o Coal: It is a non-renewable source of energy made up of complex compounds of carbon,
hydrogen and oxygen along with some free carbon and compounds of nitrogen and
sulfur. 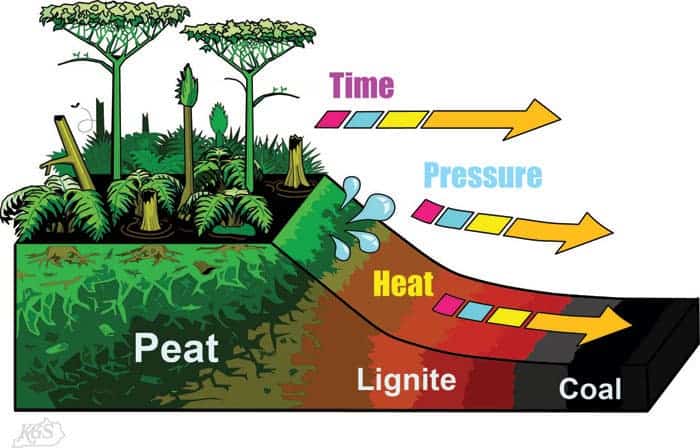 o Petroleum: It is a dark-colored viscous liquid also known as crude oil or black gold. It is a complex mixture of many hydrocarbons with water, salt, earth particles, and other
compounds of carbon, oxygen, nitrogen, and sulfur.

We obtain petroleum by drilling oil wells into the earth’s crust at its reservoirs. The petroleum extracted from wells has to be purified to obtain different useful components. The process of separating useful components from crude oil is called refining and this process is done by fractional distillation in big refineries.

The main constituents of natural gas are methane (up to 95%), ethane, and propane. It easily burns to produce heat.

 Renewable sources of energy are those that are replenished at a rate faster than that at
which they are consumed. Example:

 Disadvantages of solar energy:
o Photovoltaic cells are not cost-effective
o A typical cell develops a voltage of 0.5 to 1 V and can produce about 0.7 W of electricity
when exposed to the sun
o Availability of special grades of silicon used to produce solar cells is limited

o Interests of all the stakeholders should be given a proper say.
o Benefits of development should reach each and every individual and all generations.
 Thermal power plant – Coal and petroleum are burned to produce steam by heating
water to spin a turbine.
 Thermal power plant – Nonrenewable source.
 Hydropower plants use the potential energy of water accumulated at a height to spin a
turbine.
 Hydropower plant – (Renewable source)
 Problems – Limited places for construction (only Hilly areas)

Biomass refers to those living and nonliving organic materials that can be used as sources of energy in the form of fuel.
 Some examples of biomass fuels are wood, crops, and organic garbage.
 Biomass fuel is a renewable source of energy.
 Gas made from the anaerobic digestion of agricultural and animal waste is called biogas.
 Biodegradation is the process of biological degradation of organic matter by bacteria and
fungi.

 Limitations:
o Wind farms can be established only at places where there is a continuous wind speed of
over 10 mph
o A wind farm requires a large area (about 2 hectares) to facilitate a 1 MW generation
o Lack of energy storage facilities to provide energy backup in the absence of wind
o The initial cost of setting up a farm is quite high

 Tidal Energy: Tides are the daily rise and fall of ocean levels relative to coastlines. They
are a result of the gravitational forces of the moon and the sun on Earth, and also the
revolution of the Earth. A large amount of energy is stored in tides. They can be used as
renewable sources of energy to generate electricity.

 Wave energy: Ocean waves are caused by winds as they blow across the sea. Waves are a powerful source of energy. Electricity can also be produced from wave energy.

 Ocean thermal energy: Sunlight falls on oceans and seas. This causes the temperature of the water on the surface to rise, while the temperature at the bottom remains comparatively cooler. Ocean thermal energy conversion plants use warm surface water to boil volatile liquids such as ammonia. Ammonia gas, thus produced, creates pressure and runs the turbine of the generator. This produces electricity. Cold water is pumped up to liquefy the gas. This creates a cycle for generating electricity.

o Nuclear energy can be used for negative purposes. Therefore, there is always a fear of
misuse
o There is always a danger of leakage of radioactive material and radiation from nuclear
power plants

 Geothermal energy – Heat energy inside the earth emerges due to the high temperature in the Earth’s interior.

 Hot spring – an outlet for the underground heated water to reach the Earth .
Applications:
 For driving turbines or generators to produce electricity
 To heat buildings

Question 1:
What is a good source of energy?

Question 2:
What is good fuel?

Answer 2:
A good fuel produces a large amount of heat on burning but does not produce a lot
of smoke and is easily available. Question 3:
If you could use any source of energy for heating your food, which one would you use and why?

Answer 3:
We shall use LPG/CNG gas or electricity for heating our food because these are
efficient ways of supplying energy. The thermal efficiency of the energy source is
large, there is less pollution and the source can be used easily.

Question 4:
What are the disadvantages of fossil fuels?

Answer 4:
There are the following disadvantages of fossil fuels like coal and petroleum:
 The burning of coal or petroleum causes air pollution.
 Acidic oxides like oxides of carbon, nitrogen, and sulfur are released on
burning fossil fuels. These oxides lead to acid rains, which affect our water
and soil resources.
 Carbon dioxide gas also causes a greenhouse effect in the atmosphere.
 Fossil fuels are non-renewable sources of energy.

Question 5:
Why are we looking at alternate sources of energy?

Answer 5:
Fossil fuels, which have been traditionally used by human beings as an energy source, are non-renewable sources of energy. These sources of energy are limited and cannot replenish on their own. They are being consumed at a large rate. If this rate of consumption continues, then fossil fuels would be exhausted from the Earth. Therefore, we should look for alternate sources of energy.

Question 6:
How has the traditional use of wind and water energy been modified for our
convenience?

Answer 6:
To use the energy of flowing water large dams are built in hilly regions to store huge
amounts of water at a height. The stored water from the high level in the dam is carried
through pipes to the turbine at the bottom of the dam and runs a hydropower plant.
Similarly, wind energy is used to generate electricity. For the same purpose,
the rotatory motion of the windmill is used to tug the turbine of the electric generator.

Question 7:
What kind of mirror – concave, convex, or plain – would be best suited for use in a solar cooker? Why?

Answer 7:
A solar cooker uses the heat of sunlight to cook food. A concave mirror is
used in order to reflect and focus sunlight on a particular area. The mirror focuses
all the incident sunlight at a point. The temperature at that point increases, thereby
cooking and heating the food placed in that particular area.

Question 8:
What are the limitations of the energy that can be obtained from the oceans?

Answer 8:
Energy from the oceans can be obtained in the form of tidal energy, wave energy, and ocean thermal energy. But these energy sources suffer from the following
limitations:
 There are very few locations where dams to utilize tidal energy can be built.
 The cost of installation of powerhouses is extremely high and the efficiency of
plants is comparatively small.
 Power plants built in oceans or at sea shores will need high continuous
maintenance as chances of corrosion are extremely high.

Question 9:
What is geothermal energy?

Answer 9:
Geothermal energy is the heat energy present inside the earth in certain regions called
hot spots. Due to geological changes, molten rocks formed in the deeper hot
regions of the earth’s crust are pushed upwards and are trapped in hot spots. When
underground water comes in contact with the hot spot, steam is generated. This
steam is routed through a pipe to a turbine and used to generate electricity. 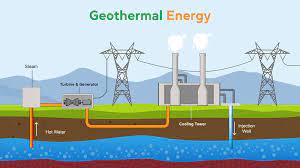 Question 10:
What are the advantages of nuclear energy?

Question 5.
Most of the sources of energy we use represent stored solar energy. Which of the following is not ultimately derived from the Sun’s energy?
(a) geothermal energy
(b) wind energy
(c) nuclear energy
(d) bio-mass
Answer
(c) nuclear energy

Question 10.
A fusion reaction is also known as

Question 14.
The variety of coal which has the highest carbon content
(a) Anthracite
(b) Peat
(c) Bituminous
(d) Lignite
Answer
(a) Anthracite

Question 15.
Dead organisms are transformed into petroleum and natural gas in
(a) presence of air
(b) absence of air

Question 17.
The main constituent of CNG is
(a) butane
(b) methane
(c) ethane
(d) propane
Answer
(b) methane

Question 20.
Solar cells are made of
(a) metals
(b) insulator
(c) semiconductors
(d) None of these

Question 21.
A solar cooker may not cook food if.
(a) Interior of the box and the container of food are perfectly shining.
(b) Glass sheet over the box is not closed.
(c) Solar cooker is placed in the shade.
(d) All the above
Answer
(d) All the above

Question 25.
Unit of calorific value of a substance is
(a) Kcal

Question 26.
The material used for the interconnection of the solar cells in the solar panel is
(a) silicon
(b) Silver
(c) aluminum
(d) copper
Answer
(b) silver

Question 30.
Which of the following is not an example of bio-mass energy?
(a) wood
(b) gobar-gas

Question 32.
Which of the following gases is the main constituent of natural gas?
(a) Methane
(b) Ethane
(c) Propane
(d) Butane
Answer
(a) Methane

Question 33.
Which of the following is the ultimate source of energy?
(a) Water
(b) Sun
(c) Fossil fuels
(d) Uranium
Answer
(b) Sun

Question 38.
Energy can neither be created nor destroyed but still, everybody discusses the energy crisis because
(a) Energy transform into different form continuously.
(b) Usable form of energy is dissipated to the surroundings in less usable forms.
(c) Energy is consumed and cannot be used again.
(d) All of the above
Answer
(d) All of the above

Question 40.
Select the important factor for the site selection of a thermal power plant.
(a) Distance from the populated area
(b) Availability of fuel
(c) Availability of water
(d) Cost of plant
Answer

Question 42.
Solar cells are made of
(a) germanium
(b) silicon
(c) Silver
(d) aluminum
Answer
(b) silicon