We, in this article, have provided short and detailed notes of Socialism In Europe And The Russian Revolution Class 9 Social Science along with the essential key terms, map work, and ncert solutions. Students can get help and go through before their exams to get the gist of the concepts and be prepared for their examinations.

We will focus on the social change that took place in Russia, the Russian revolution, February revolution, and October revolution, and also lay emphasis on how the civil war broke out.  This article will study all the events followed one after the other and their effects.

THE AGE OF SOCIAL CHANGE

The French Revolution opened the possibility of creating a dramatic change in how society was structured. Not everyone in Europe, however, wanted a complete transformation. Some were ‘conservatives’, while others were ‘liberals’ or ‘radicals’. We will look briefly at some important political traditions of the nineteenth century.

Liberals: Wanted a nation that tolerated all religions. They were against the uncontrolled power of the dynastic rulers. They wanted rights to be enjoyed by the individuals.They wanted an elected parliamentary government, subject to laws interpreted by a well-trained judiciary that was independent of the control of the dynastic rulers and officials. But they were not democrats because they did not believe in a universal adult franchise.

Radicals: Wanted a nation in which the government was based on most of a country’s population. They disliked concentration of property in a few hands, not the existence of private property.

Conservatives: They resisted change. After the revolution, they started accepting change provided it was slow and had links and respected the past.

Industries and Social Change: This was a time of economic and social change.  With the advent of the industrial revolution, men, women and children were pushed into factories for low wages and longer working hours.  Liberals and radicals who were factory owners felt that efforts must be encouraged so that the benefits of industrialization should be passed on to workers.

Socialism in Europe: Socialists were against private property and saw it as the root cause of social evils. They had different visions of the future. Some believed in cooperatives, some demanded that governments must encourage cooperatives.

Karl Marx and Friedrich Engels added that industrial society was capitalist. Marx believed that a socialist society would free the workers from capitalism. This would be a communist society.

Support for Socialism Socialists formed an organization called ‘Second International’ to spread socialist ideas. Workers in Germany and England began forming associations to fight for better living conditions. They demand a reduction of working hours and the right to vote.

Economy and Society:  At that time, Russia was an agriculture-based economy. Industries were being set up, which was the mostly private property of industrialists. Workers were divided into groups but they did unite to strike work when they were dissatisfied. Peasants had no respect for nobility, very unlike the French peasant. Russian peasants were the only peasant community that pooled their land and their commune divided it.

Socialism in Russia: All political parties were illegal in Russia before 1914. The Russian Socialist Democratic Labour Party was formed in 1898. It struggled to give peasants their rights over land that belonged to nobles. Land got divided among peasants periodically which made them natural socialist and it was felt that peasants and not workers would be the main source of the revolution. Lenin did not agree with this as he felt that peasants were not one social group. The party was divided into Bolsheviks and Mensheviks.

The 1905 Revolution: Russia was an autocracy. The Tsar was not subject to the parliament. Liberals wanted to end this state of affairs. They worked towards demanding a constitution during the Revolution of 1905.

Bloody Sunday: Prices of essential goods rose so quickly by 1904 that the real wages declined by 20%. During this time, four members of the Putilov Iron Works were dismissed. The action was called for. Over 110,000 workers in St. Petersburg went on strike, demanding a reduction in working hours and an increase in wages.  The procession was led by Father Gapon.This procession was attacked by the police and Cossacks. Over 100 workers were killed. Strikes took place as a reaction. People demanded a constituent assembly.

The Tsar allowed the creation of an elected consultative Parliament or Duma. The Tsar dismissed the first Duma (Russian Parliament)  within 75 days and announced the election of a second Duma.

The First World War and the Russian Empire: The war was initially very popular in Russia, but later the support grew thin. Russian armies lost badly in Germany and Austria. There were 7 million casualties and 3 million refugees in Russia.

Industries were also affected and all suffered huge loss of workers and manual laborers. This leads to closing down of small workshops and in turn leads to shortage of grains and bread.

THE FEBRUARY REVOLUTION IN PETROGRAD

The people involved were the parliamentarians, workers, women workers, soldiers and military commanders.

The people involved were Lenin, the Bolsheviks, and troops (pro-government).

The Civil War — When the Bolsheviks ordered land redistribution, the Russian army did not like this idea and began to break up. Non-Bolshevik socialists, liberals and supporters of autocracy condemned the Bolshevik uprising. They formed their troops and were called ‘Greens’, fighting against Bolshevik ‘Red’. The pro-Tsar‘ Whites” controlled most of the Russian empire. They were supported by French, American, British and Japanese troops. All these fought a war with the Bolsheviks.

Making a Socialist Society — The Bolsheviks kept industries and banks nationalized during the civil war. A process of centralized planning was introduced. Rapid construction and industrialization started. An extended schooling system developed.

Stalin and Collective Farming — Stalin believed that rich peasants and traders stocked supplies to create a shortage of grains. Hence, collectivization was the need of the hour. This system would also help to modernize farms. Those farmers who resisted collectivization were punished, deported or exiled.

By the 1950s, it was recognized in the country and outside that everything was not in keeping with the ideals of the Russian revolution. Though its industries and agriculture had developed and the poor were being fed, the essential freedom to its citizens was being denied. However, it was recognized that social ideals still enjoyed respect among the Russians. But in each country, the ideas of socialism were rethought in various ways.

Q1. What were Russia’s social, economic, and political conditions before 1905?

The following were Russia’s social, economic, and political conditions before 1905.

(a) Social Conditions: The majority religion was Russian Orthodox Christianity which had grown out of the Greek Orthodox Church. But the empire also included Catholics, Protestants, Muslims and Buddhists. The non-Russian nationalities were not treated equal to that of Russian nationalities. They were not allowed to follow their culture and language. Workers were divided into groups based on skill and training.

(b) Economic conditions: Russian economy was based on agriculture. They mainly export grains and some prominent industries that flourished that time were st. Petersburg and Moscow. Much of the production was done by the craftsmen.. With the expansion of the Russian rail network, foreign investment in factories grew. There was huge coal, iron and steel production. The workers were exploited by capitalists and filled their pockets with the profits that are earned by the workers, and they are left miserable.

(c) Political Conditions: Russia was a monarchy. (Tsar Nicholas II ruled Russia and its empire that extended to current-day Finland, Latvia, Lithuania, Estonia, parts of Poland, Ukraine and Belarus. It stretched to the Pacific and comprised today’s Central Asian states, as well as Georgia, Armenia and Azerbaijan). The Tsars believed in the divine rights of kings. They were not responsible to the Parliament. All political parties were illegal in Russia.

Q2. In what ways was the working population in Russia different from other European countries before 1917?

Q3. Why did the Tsarist autocracy collapse in 1917?

During the February Revolution, the factory workers and the Government Regiments played an important role. This all led to the downfall of the monarchy in Russia and establishment of Petrograd Sooviet.

Vladimir Lenin, the Bolshevik leader, played a major role during the October revolution. The Bolshevik Party overthrew the Provisional Government and gained power. The Russian Communist Party came into existence.

Q5. What were the main changes brought about by the Bolsheviks immediately after the October Revolution?

Many changes were brought about by the Bolsheviks after the October Revolution. They were:

Q6. Write a few lines to show what you know about:

(i) Kulaks: They were the well-to-do peasants who were supposed to be holding stocks in the hope of higher prices. They were raided so that they may be eliminated in order to develop modern farms and establish state-controlled large farms.

(ii) The Duma: The Duma was a consultative parliament that was created on the permission of the Tsar during the 1905 Revolution.

(iii) Women workers between 1900 and 1930: Women made up 31% of the factory labor force, but were paid between 1/2 and 3/4 of a man’s wages. They actively led the strikes in many factories. They even worked on collective farms.

(iv) The Liberals: Wanted a nation which tolerated all religions. They were against the uncontrolled power of the dynastic rulers.They wanted rights to be enjoyed by the  individuals.They wanted an elected parliamentary government, subject to laws interpreted by a well trained judiciary that was independent of control  of the dynastic rulers and officials. But they were not democrats because they did not believe in universal adult franchise.

Q1. On the given outline map of the world, locate the countries that were central powers in the First World War. 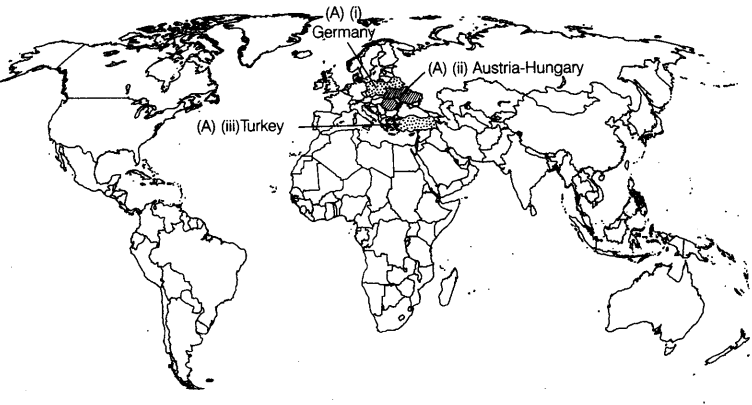 Q2. On the given outline map of the world, four features are marked. These are the countries that were Allied Powers in the First World War. Identify them.

Q3. In the given outline map of the world, two features are marked. These are the countries that were Allied in the First World War. Identify them. 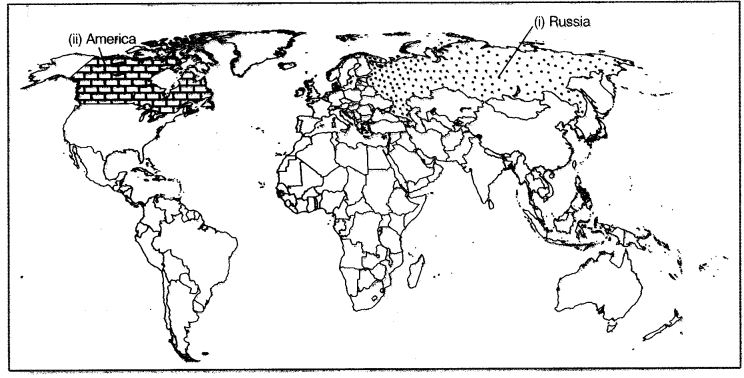