We are providing you with the detailed notes of geography lesson 1 resources and development class 10 along with the ncert solutions, multiple-choice questions, and some value-based questions so that the students can cope with the new assessment scheme. Students after going through these short notes will be able to understand the new pattern and the concepts will be on fingertips.

What are Resources and What are their types?

Resource- Everything available in our environment which can be used to satisfy our needs, provided it is technologically accessible, economically feasible, and culturally acceptable can be termed as a resource.

These resources can be classified in the following ways-

Biotic resources are obtained from the biosphere and have life such as human beings, flora, and fauna, fisheries, livestock, etc.

All those things which are composed of non-living things are called abiotic resources. For example- rocks and metals.

Renewable resources can be renewed or reproduced by physical, chemical, or mechanical processes. For example; solar and wind energy, forests, and wildlife, etc.

Non-renewable resources occur over a long period of time. Minerals and fossil fuels are examples of such resources. These resources take millions of years in their formation.

Individual resources are owned privately by individuals. For example; many farmers own land which is allotted to them by the government against the payment of revenue.

Community-owned resources are resources that are accessible to all the members of the community. Example- village commons, public parks, picnic spots, playgrounds in urban areas, etc.

National resources technically, all the resources belong to the nation. The computer has legal powers to acquire even private property for the public good.

Potential resources- resources that are found in a region, but have not been utilized. For example; the western parts of India particularly Rajasthan and Gujarat. Have enormous potential for the development of wind and solar energy, but so far these have not been developed properly.

Developed resources- these are surveyed and their quality and quantity have been determined for utilization.

Resources are vital for human survival as well as for maintaining the quality of life. It was believed that resources are gifts of nature. Human beings used them indiscriminately and this has led to the following major problems:

Land resources are used for the following purposes-

Land not available for cultivation- 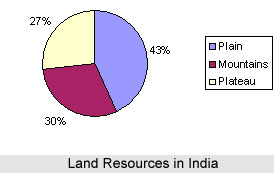 Land use pattern in India-

At present, there are about 130 million hectares of degraded land in India.

Some human activities such as deforestation, over-grazing, mining, and quarrying have contributed significantly to land degradation.

In states, like Jharkhand, Chhattisgarh, Madhya Pradesh and Orissa deforestation due to mining has caused severe land degradation.

In states like Gujarat, Rajasthan, Madhya Pradesh, and Maharashtra overgrazing are one of the main reasons for land degradation.

In the states of Punjab, Haryana, Western Uttar Pradesh, over-irrigation is responsible for land degradation.

1. Which one of the following types of resources is iron ore?

2. Under which of the following type of resources can tidal energy be puy?

3. Which one of the following is the main cause of land degradation in Punjab?

4. In which one of the following states is terrace cultivation practiced?

5. In which of the following states is black soil found?

Q2. name three states having black soil and the crop which is mainly grown in it?

Q3. what type of soil is found in the river deltas of the eastern coast? Give three main features of this type of soil.

Alluvial soil is found in the river delays of the eastern crops. Alluvial soil is rich in p[otash, phosphoric acid, and lime. It has a high water retention capacity and is highly fertile soil.

Q4. what steps can be taken to control soil erosion in the hilly areas?

Q5. what are the biotic and abiotic resources? Give examples?

Q6. Explain land use pattern in India and why has the land under forest not increased much since 1960-61?

Q7. How has technical and economic development led to more consumption of resources?

Thus, technical and economic development; together lead to more consumption of resources.

1. The availability of resources is a necessary condition for the development of:

None of the above

2. Some countries colonized other countries because of their:

3. In which of the following books, Schumacher presented Gandhian philosophy

5. What  % of Indian land area is mountain area:

6.What is the total geographical area of India?

7.What % of Geographical area is desired forested area?

8.How many million hectares of Indian land is degraded land?

9. Which of the following is the main reasons for land degradation in the states of Gujarat, Rajasthan, M.P., and Maharashtra?

10. Which is the most widely spread and important soil?

11. The soil which has a higher concentration of Kanker nodules is called-

13. The soil which develops in areas with high temperatures and heavy rainfall is called-

14.Red laterite soil is suitable for growing which of the following crops-

15. When the topsoil is washed away when water flow as a sheet over large areas down a slope is known as-

17. Biotic resources are obtained from-

Ans- Biosphere and include living organisms

18. Rocks and metals are examples of-

19. Many farmers own land which is allotted to them by the government:

Ans- against the payment of revenue

20. Plantation, pasture lands, ponds, water in wells, etc are some examples of-

21. Resources that are accessible to all the embers of the community are called-

22. Resources belonging to the nation are called-

23. Resources that are found in a region, but have not been utilized are called-

24. Resources that are surveyed and their quality and quantity have been determined for utilization are called-

25.  Materials in the environment that have the potential to satisfy human needs but human beings do not have the appropriate technical knowhow to access them are called-

Value-Based Questions For Resources and Development

To follow the new assessment scheme we are also jotting down some value-based questions of class 10 th lesson Resources and development  to help the students.

Q1. What was the main contribution of the Brundtland Commission Report, 1987?

The seminal contribution concerning resource conservation at the global level was made by the Brundtland Commission Report, 1987.

This report introduced the concept of Sustainable development and advocated it is as a means for resource conservation, which was substantially published in a book, entitled Common Future. 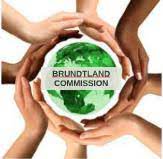 Q2. Resources are a function of human activities. Elaborate the statement with suitable arguments.

Q5. Explain the relationship between the process of colonization and the rich resources of colonies?

The history of colonization reveals that rich resources in colonies were the main attractions of the foreign traders.

It was primarily the higher level of technological development of colonizing countries that helped them to exploit the resources of other regions and established their supremacy over colonies.

Their fore resources can contribute to development only when they are accompanied by appropriate technological development and institutional changes.

Read the extract given below and answer the following questions

We have shared our land with the past generations and will have to do so with the future generation too. Ninety-five percent of our basic needs of food, shelters, and clothing are obtained from the land.

Human activities have not only brought about the degradation of the land but have also aggravated the pace of natural forces to cause damage to the land. Some human activities such as deforestation, overgrazing, mining, and quarrying too have contributed significantly and land degradation.

1. Most of the basic needs for food, shelter, and clothing are obtained from

2. Deforestation due to mining has caused severe land degradation in the state of-

3. Over irrigation is responsible for land degradation due to the following reasons-

4. Human is considered as the main culprit for land degradation because

We have penned down the summary of the lesson resources and development class 10 along with the ncert solutions and MCQs. we have also mentioned some value-based questions. Students after reading the lesson can go through these to get the gist of the lesson at just one stroke.