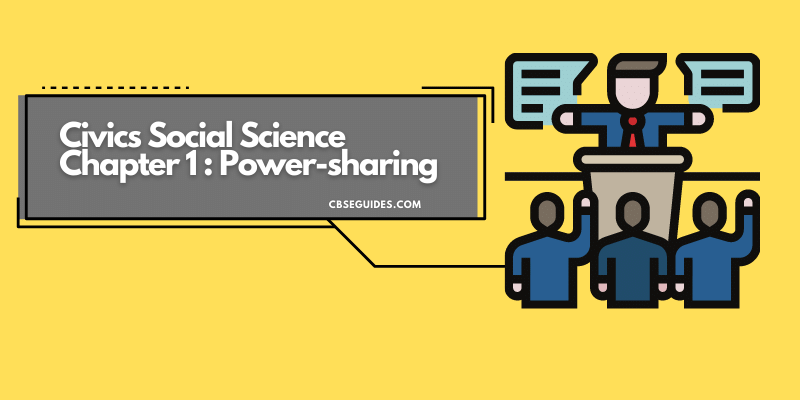 We are providing you with the short and detailed notes of class 10th civics chapter ls 1 power-sharing along with the ncert solutions and multiple-choice questions so that students could get help to understand the new pattern and boost their examination preparation.

The French and Dutch-speaking ministers are in the central government.

Some special laws require the support of the majority of members from each linguistic group.

Many powers of the central government in which both the communities ( french and dutch) have equal representation.

A ‘ community government’ exists. It is elected by the people belonging to one language community. This government engages with cultural, educational, and language-related issues.

This kind of governance has prevented civil strife between the two different linguistic communities.

Why is Power Sharing Desirable?

Power-sharing is the very essence of democracy as the participation of citizens is an essential factor.

An intelligent sharing of power among a legislature, executive, and judiciary is very important to the design of democracy.

The idea of power-sharing has emerged in opposition to the notions of undivided political power.

In modern sharing democrats, power-sharing arrangements can take many forms such as;

1.  Tyranny of the majority is not just oppressive for the minority; it often brings ruin to:

2. Power-sharing is good because it helps to:

Ans- reduce the possibility of conflict between social groups

3. A legitimate government is one where citizens;

Ans- through participation, acquire a stake in the system

4. One basic principle of democracy is that people;

Ans- are the source of all political powers

5. In a good democratic government;

Ans- due respect is given to diverse groups and views

6. In a democracy political power should be distributed among;

Ans- as many citizens as possible

7. Judges can check the functioning of laws made by them;

8. A general government for the entire country is called;

9. The government at the provincial for the regional level, in India are called;

11. In a democracy, the citizen’s midst have freedom;

Ans- to choose among various contenders for power

12. Power is shared among different political parties that represent;

13. The government of Ontario state in Canada has agreed to a land claim settlement with the:

14. The Bombay high court ordered the Maharashtra state government to immediately take action and improve living conditions for the

15. Belgium has borders with:

16. Out of the total population of Belgium;

18. Sri Lankan is just a few kilometers off the southern coast;

19. Sri Lanka emerged as an independent country in;

20. In 1956, an act was passed which recognized Sinhala as the only official language, thus disregarding;

Q1. What are the different forms of power-sharing in modern democracies? Give an example of each of these.

Q2. state one prudential reason and one moral reason for power sharing with an example from the Indian context.

A prudential reason for power sharing is that it leads to an avoidance of conflict between social groups. Since social conflict often leads to violence and political instability, power-sharing is a good way to ensure the stability of political order. In India, seats have been reserved in legislatures for the socially weaker sections keeping in mind this prudential reason for power-sharing.

A  moral reason for power sharing is that it upholds the spirit of democracy. In a true, democratic setup, the citizens have a stake in governance. In India, the citizens can come together to debate and criticize the policies and decisions of the government. This in turn puts pressure on the government to rethink its policies and reconsider its decisions. This active political participation is in keeping with the moral reason for power-sharing.

Q4. Match List I (forms of power-sharing) with List-II (forms of government) and select the correct answer using codes given below the lists :

Read the extract and answer the following questions.

The idea of power-sharing has emerged in opposition to the notions of undivided political power. For a long time, it was believed that all power of government must reside in one person or group of persons located in one place. It was felt that if the power to decide is dispersed, it would not be possible to take quick decisions and enforce them. But these notions have changed with the emergence of democracy. One basic principle of democracy is that people are the source of all political power. In a democracy, people rule themselves through institutions of self-government. In a good democratic government, due respect is given to diverse groups and views that exist in a society. Everyone has a voice in the shaping of public policies. Therefore, it follows that in a democracy political forms of power-sharing should be distributed amongst as many citizens as possible.

Answer the following MCQs by choosing the most appropriate option:

1. The basic principle of democracy is

Ans- people are the source of political power

2. Which is a prudent reason for power-sharing?

Ans- both the above options

3. Which of the following options describes a good democratic system?

Ans- everyone has a voice in the shaping of public policies.

4. Which of the following is not one of the aspects of the federal division of power?

Ans-  there is no vertical division of powers

Read the extract and answer the following questions

Democracy is based on political equality and all individuals have equal right to choose their representative. But along with this ( political equality), we can see growing economic inequality among individuals. A small number of the ultra-rich enjoy a highly disproportionate share of wealth and income. Due to these, their share in the total income of the country is increasing. On the other hand, the income of the poor is declining. Sometimes they find it difficult to meet their basic needs of life, such as food clothing, house, education, and health. Though poor constitute a large proportion of voters, the democratic governments are not keen to take up poverty. The situation is much worse in some other countries. Like Bangladesh where more than half of its population lives in poverty, even people of poor countries are now dependent on the rich countries for food supplies.

Answer the following MCQs by choosing the most appropriate option:

1. Democracy is based on

2. Does a democracy hold its purpose?

3. What is the present scenario of society?

Ans-  a small number of ultra-rich enjoy a highly disproportionate share of wealth and incomes.

Q1. How the Belgian government solved its ethnic problem?

The path of accommodation adopted in Belgium.

Q2. What is Majoritarianism? How has it led to the alienation of the majority community in Sri Lanka?

The dominance of the majority community to rule the country in whichever way it wants, totally disregarding the wishes and needs of the minority community is known as majoritarianism.

In a nutshell, we have provided you with a short and detailed summary of the Class 10th civics Chapter 1 Power Sharing and the ncert solutions, multiple-choice questions, case study, and value-based questions to help the students understand the latest assessment pattern and prepare for their examinations.