The disappearance of the forests is referred to as deforestation. Under colonial rule, it became very systematic and extensive.

Land to be improved-
As the population increased over the centuries and the demand for food went up, peasants extended the boundaries of cultivation by clearing forests. The British encouraged the production of commercial crops like jute, sugar, wheat, and cotton for their industries as raw materials. The British thought that forests were unproductive land as they yielded no revenue nor agricultural produce. Cultivation was viewed as a sign of progress. Oak forests in England were disappearing. There was no timber supply for the shipbuilding industry. Forest resources of India were used to make ships for the Royal
Navy. Leapers on the track

Spread of railways required two things :
land to be cleared to lay railway tracks
wood as fuel for locomotives and for railway line sleepers.

Large areas of natural forests were cleared for tea, coffee, and rubber plantations.
Thus the land was given to planters at cheap rates.

The British were worried that the use of forests by local people and the reckless felling of
trees by traders would destroy forests and hence invited German expert Dietrich Brandis as the first Inspector General of Forests in India.

Brandis set up the Indian Forest Service in 1864 and helped formulate the Indian Forest Act of 1865. The Imperial Forest Research Institute was set up in Dehradun in 1906.
Scientific forestry was taught there. 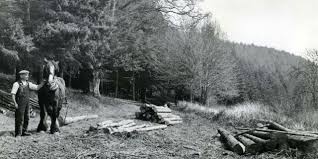 In the scientific forestry system, forests with different kinds of trees were replaced by plantations. Forest management plans were made by forest officials. They planned how much of the forest had to be cut and how much had to be replanted.

The Forest Acts divided forests into

Reserved forests- These were the best forests villagers could not enter these
forests.

Shifting cultivation or swidden agriculture was the agricultural practice in many parts of Asia, Africa, and South America. The colonial foresters did not favor this system as it made it difficult for the government to calculate taxes. 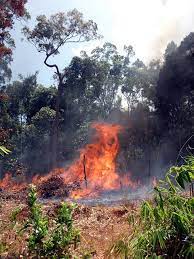 In addition, the forest officials saw in it the danger of fire and also that no trees could grow on this kind of land. The lives of the forest people and nearby villagers depended upon the forests. Their various needs of fuel, fodder, and even food were dependent on forests. As these people were not allowed to use the forest, their life became difficult.

The forest laws stopped the villagers from hunting in the forests but encouraged hunting as a big sport. They felt that the wild animals were savage, wild, and primitive, just like the Indian society and that it was their duty to civilize them.

New opportunities opened in the trade as the forest department took control of the forests, e.g., the Mundurucu peoples of the Brazilian Amazon. With the colonial influence, trade was completely regulated by the government. Many large European trading firms were given the sole right to trade in forest products of a particulate area. Many pastoral communities lost their means of livelihood. New opportunities for work did not always mean improved well-being for the people.

Forest communities rebelled against the changes imposed upon them. The people of Bastar were one such group. The people here believed that the land was given to them by the earth and in return, they look after the earth. Their cultural and social life was connected to the forest.

The initiative was taken by the Dhurwas of the Kanger forest where reservation first took place. The British sent troops to suppress the rebellion. It took them three months to regain control. A victory for the people of Bastar was that the work on the reservation was suspended and the area was reduced to half.

Java is now famous as a rice-producing island in Indonesia. But once upon a time, it was
covered with forests. Dutch were the colonizers of Java.

Kalanga were skilled forest cutters and shifting cultivators. They rose in rebellion against the Dutch in 1770 but their uprising was suppressed.

Scientific Forestry in Java: Forest laws were enacted in Java. The villagers resisted these
laws. Forest timber was used for ships and railway sleepers. The Dutch government used the ‘balandongdiensten’ system for extracting free labor from the villagers.

Samin’s Movement: Samin of Randublatung village (a teak forest village) questioned the
state ownership of forests. A widespread movement spread. They protested by lying on the ground when the Dutch came to survey it and refusing to pay taxes and perform labor.

World Wars and Deforestation: The world wars had a major impact on forests. The forest department cut freely to meet the British demands. The Dutch followed the scorched earth policy of destroying sawmills, and burning logs of teak so that the Japanese could not benefit from it. The Japanese forced the villagers to cut down forests when they occupied the area.

New Developments: Conservation and preservation of forests have now become the focus rather than timber. It has also been realized that if forests are to survive, the local
community needs to be involved. There are many such examples in India where
communities are conserving forests in sacred groves. This looking after is done by each
member of the village and everyone is involved.

Question 1: Discuss how the changes in forest management in the colonial period affected the following groups of people:
(a) Shifting cultivators

(c) Firms trading in timber/forest produce
Because of the huge demand for timber, it was a boon for timber merchants. They must
have seen good growth in their incomes.

(e) Kings/British officials engaged in shikar
The killing of ferocious animals; like tigers or wolves was monetarily rewarded. Moreover,
hunting was viewed as a sign of bravery and valor. The Kings and British officials must have enjoyed the newfound honor in society.

Question 2: What are the similarities between colonial management of the forests in Bastar and in Java?

There were certain similarities in the colonial management of forests in Bastar and
Java. In both cases, the traditional rights of forest dwellers were taken away and they were
forced to work for their colonial masters. Large-scale deforestation took place and felled trees were replaced with monocultural plantations.

There was a huge demand for sleepers from the railways. In those days
sleepers were made from wood. Expansion of the railway network resulted in large-scale deforestation.

Shipbuilding was an important industry because ships were an integral part of
the military power of the British. When the number of oak trees sharply reduced in
Britain, Indian forests provided a good source of supply. Thus, shipbuilding also
contributed to large-scale deforestation in India.

The growing European population meant an increased demand for food
grains. This resulted in the expansion of cultivated land in India. More land was cleared of
forests to make way for cultivation.

There was increased demand for various raw materials; like cotton and indigo for the expanding industries in Britain. This resulted in large-scale commercial farming in
India. This could also become possible by clearing forests

Demand for tea and coffee also increased in Britain. The climate of north- Eastern India and the eastern coast were perfect for plantations. Large areas of forests were cleared for making way for plantations. The British plantation owners were given
land on very cheap rates.

(f) Adivasis and other peasant users

Adivasis had always been the protectors of forests and hence they had no
role in deforestation. However, some peasants may have utilized the opportunity to
expand the cultivated land; as had happened in Java. Moreover, the significant
increase in cultivated land also indicates the clearing of forests for farming.

Question 4: Why are forests affected by wars?

The two World Wars had major impacts on forests. More trees were cut to meet the
wartime needs of Britain. In Java, the Dutch followed the ‘scorched earth policy just before the Japanese occupation of the region. They destroyed sawmills and burnt huge piles of giant teak logs. The Japanese continued the exploitation of forests. They forced forest villagers to cut down forests. For many villagers, it was an opportunity to expand the cultivated area.

This map shows the political map of Chhattisgarh. Bastar, Where the rebellion occurred, is located in the Southernmost part of Chhattisgarh and has a common border with Telangana, Odisha, and Maharashtra. 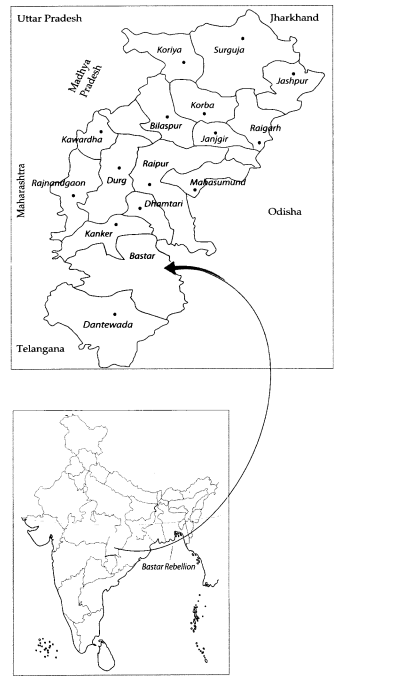 Question 1.
Local and label the following items on the given map with appropriate symbols.
1 Region of Bastar Rebellion
2 Region of Raipur
3 Region of Koriya
4 Region of Jashpur

Question 2.
Locate and label the following items on the given map with appropriate symbols.
(i) Region of Bastar Rebellion
(ii) Region of Raipur
(iii) Region of Koriya
(iv) Region of Jashpur 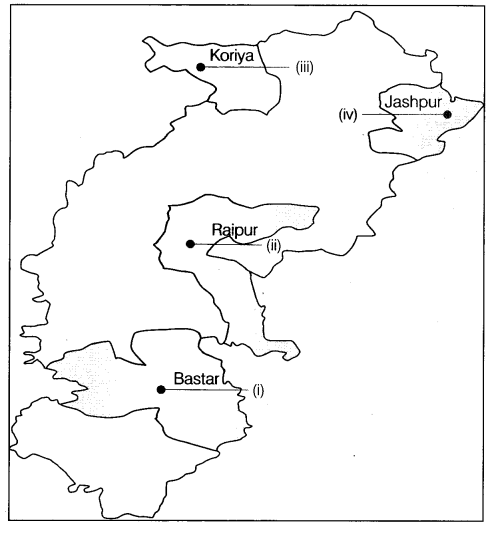 We have also shared some important MCQs to help the students to go through the in-depth lesson Forest Society And Colonialism Class 9th.

Question 1.
Where was the first Imperial Forest Research Institute set tip?
(a) At Dehradun
(b) At Shillong
(c) At Shimla
(d) At Uttarakhand

Answer: (a) At Dehradun
The first Imperial Forest Research Institute was set up at Dehradun.

Question 2.
Which of the following is not the name of shifting or swidden agriculture/cultivation?
(a) Milpa
(b) Chitemene or Tavy
(c) Podu/Penda
(d) Taungya

Answer: (d) Taungya
Taungya. While others are names of shifting agriculture.

Question 3.
Where is Bastar located?
(a) In Andhra Pradesh
(b) In Orissa
(c) In Southernmost parts of Chhattisgarh
(d) In Madhya Pradesh.

Question 4.
In which country a similar situation prevailed as in the forest of Bastar?
(a) In Somalia
(b) In Indonesia
(c) In Malaysia
(d) In Sri Lanka
Answer

Answer: (b) In Indonesia
In Indonesia, a similar situation prevailed in the forest of Bastar.

Question 7.
Which of the following community or tribes live in Bastar?
(a) Maria
(b) Gaddis
(c) Gonds
(d) Hallas

Answer: (b) Gaddis
The Gaudin live in Bastar. White others live in different regions.