The Consumer in the Marketplace

Rules and regulations are required for the protection of consumers in the
marketplace. Exploitation in the marketplace happens often. Markets do not work in a fair manner when producers are few and powerful whereas consumers purchase in small amounts and are scattered.

This happens especially when large companies are producing these goods. These companies with huge wealth, power, and reach can manipulate the market. At times, false information is passed on through the media, and other sources to attract consumers.

In India, the consumer movement as a ‘social force’ originated with the necessity of
protecting and promoting the interests of consumers against unethical and unfair
trade practices. Rampant food shortages, hoarding, black marketing, and adulteration of food and edible oil gave birth to the consumer movement in an organized form in the 1960s.

Till the 1970s, consumer organizations were largely engaged in writing articles and holding exhibitions. They formed consumer groups to look into the malpractices in
ration shops and overcrowding in the road passenger transport. More recently, India witnessed an upsurge in the number of consumer groups.

Rights that are provided by law

Consumers have the right to be protected against the marketing of goods and delivery of services that are hazardous to life and property. Producers need to strictly follow the required safety rules and regulations. There are many goods and services that we purchase that require special attention to safety.

Right to be informed

Consumers have the right to be informed about the particulars of goods and services that they purchase. Consumers can then complain and ask for compensation or replacement if the product proves to be defective in any manner. Similarly, one can protest and complain if someone sells a good at more than the printed price on the packet. This is indicated by ‘MRP’ — maximum retail price.

Any consumer who receives a service in whatever capacity,
regardless of age, gender, and nature of service has the right to choose whether to
continue to receive the service. 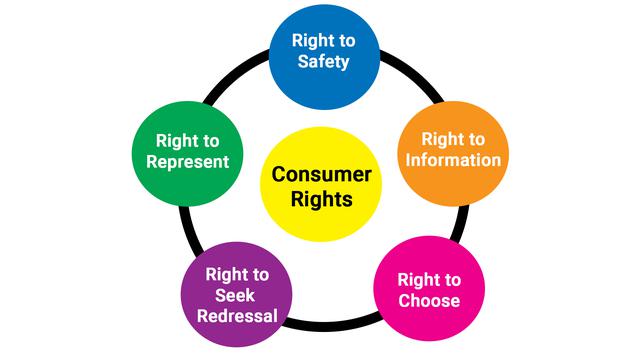 Right to be heard

Consumers have the right to be heard in case of a grievance.

Consumers have the right to seek redressal against unfair trade practices and exploitation. If any damage is done to a consumer, he or she has the right to get compensation depending on the degree of damage.

Right to represent in consumer courts

The consumer movement in India has led to the formation of various organizations locally known as consumer forums or consumer protection councils. They guide consumers on how to file cases in consumer court. On many occasions, they also represent individual consumers in the consumer courts. These voluntary organizations also receive financial support from the government for creating awareness among people.

To purchase quality-marked products such as ISI, AGMARK, etc. Ask for a cash memo for the items purchased whenever possible. To complain for genuine grievances, consumers must know their rights and must exercise them.

The Consumer Redressal Process is becoming cumbersome, expensive, and time-consuming. Many a time, consumers are required to engage lawyers. These cases require time for filling and attending the court proceedings etc.

In most purchases, cash memos are not issued hence evidence is absent. Most purchases in the market are small retail sales. The enforcement of laws that protect workers, especially in the unorganized sectors is weak. Rules and regulations for the working of markets are often not followed.

To protect and promote the interest of consumers. Under COPRA, three-tier quasi-judicial machinery at the district, state, and national levels is set up for redressal of consumer disputes.

If a case is dismissed in district-level court, the consumer can also appeal in state and
then in national-level courts. Thus, the Act has enabled us as consumers to have the
right to represent in the consumer courts.

India has been observing 24 December as National Consumers’ Day. It was on this day
that the Indian Parliament enacted the Consumer Protection Act in 1986. India is one of the countries that have exclusive courts for consumer redressal. There are today more than 700 consumer groups in the country of which only about 20-25
are well organized and recognized for their work.

Q.1 What are the various ways by which people may be exploited in the market?

There are many ways by which consumers are exploited. A few of them are:

A. Selling at higher prices — The price charged for the product will not be proportionate to the quality.

B. Product risk — Drugs that are hazardous, banned or beyond the expiry date, electrical appliances with inadequate safety precautions, etc;

C. Adulteration — This is very common in food items and could prove to be highly injurious to one’s health;

D. Sub-standard Products — Items whose quality is far below the required standard.

E. False Claims — Manufacturers make false representations about their products in the media with a view to mislead the consumers. Claiming that the use of a particular oil will cure baldness, using a company’s fairness cream for a specific period will make one fair, etc., are all typical examples of exaggerated, misleading advertisements.

F. Warranty/ Annual Maintenance Contract — In many cases, though the product will have a warranty or will be under an annual maintenance contract (AMC) when a problem arises, the consumer is told that certain parts will not be covered and they will have to pay.

Q.2 Think of one example from your experience where you thought that there was some ‘cheating’ in the market.

Q3. What do you think should be the role of the government to protect consumers?

The government is responsible for creating marketplaces that are fair, efficient, and competitive for producers, traders, and consumers. The Ministry of consumer affairs is responsible to protect the consumers.

The Indian government paid a vital role in consumer protection by enacting various rules and regulations such as:

2) Certification marks such as ISI for industrial goods, AGMARK for agricultural products, etc., provide quality assurance of goods and services.

4) Prevention of Black Marketing and Maintenance Commodities Act,  of Essential

Q4. What could have been the steps taken by consumer groups?

Consumer groups should issue leaflets providing information so as to educate consumers on matters affecting them.

Q5.There may be rules and regulations but they are often not followed. Why? Discuss

There are rules and regulations to protect the consumer from exploitation, but they are not followed because:

Q6. When we buy commodities we find that the price charged is sometimes higher or lower than the Maximum Retail Price printed on the pack. Discuss the possible reasons. Should consumer groups do something about this?

In fact, consumers should always look for retailers who sell below the MRP because the MRP is the maximum retail price allowed for that commodity and not the actual price and a retailer can well reduce the margin built into the MRP.

The possible reason for higher prices may be overcharging by the retailer for an ignorant customer. Sometimes it also happens that the manufacturer increases the price of a product and sells old stocks/products at new price rates and if buyers ask the reason they simply answer that the Price has increased because of the changes in duties or increase in the cost of production and the new packages carry the revised MRP.

Obviously, this new price does not apply to the stock already with the retailer. And this is where retailers try to make a quick buck by trying to sell the old stock at the new revised rate, even though doing so is an unfair trade practice.

Q7. People make complaints about the lack of civic amenities such as bad roads or poor water and health facilities but no one listens. Now the RTI Act gives you the power to question. Do you agree? Discuss.

Yes, RTI gives us the power to question the government and help us find out who is responsible for the corruption or incompletion of work and make him liable for his Poor or bad performance. After the implementation of RTI, there has been transparency and accountability in the government working and the consumer grievances are redressed as early as possible.

Q8. What is the difference between the consumer protection council and consumer court?

Consumer Protection Council is a non-government organization, that spreads awareness among common people and helps them to file cases in court and get justice for the consumers.

They represent individuals in the consumer courts. Consumer courts are government organizations that provide redressal for consumer grievances by passing orders which are enforceable by law. Consumer court is established at the district, state, and national levels.

Q9. Why are rules and regulations required in the marketplace? Illustrate with a few examples.

Rules and regulations are required in the marketplace to protect consumers from unfair trade practices and exploitation by sellers. Sellers often sell adulterated, defective, expired goods, and every time it’s the consumer who has to suffer due to sellers’ malpractices. Examples:

Q10. What factors gave birth to the consumer movement in India?

In India, the consumer movement originated as a social force with the necessity of protecting and promoting the interests of consumers against unethical and unfair trade practices.

• Adulteration gave birth to the consumer movement in an organized form in the 1960s. Evolution: Steps taken by pressure groups and civil society for creating consumer awareness resulted in the formation of the consumer protection act (COPRA) by the government on 24th December 1986.

Consumers being the victims of unfair trade practices of the seller need to be conscious during the purchase of goods and services. Examples:

Q12. Mention a few factors which cause the exploitation of consumers.

Factors causing exploitation of consumers are

(a) Limited Information: Due to the absence of correct and timely information regarding quality, price, instructions, warnings, etc. Consumers are not aware of how to use the product and they end up paying more for a product than the MRP.

(b) Limited Supplies: The consumers are exploited when the goods and services are not available in the market in the required amount or quantity. This makes or gives chance for black marketing & hoarding, of the goods, etc.

(c) Limited Competition: At times only one producer or a group of producers produce some products. They manipulate the prices of their products by making these non-available for a certain period. So the prices rise high and the benefit goes to that particular group causing loss to the customers.

Q13. What is the rationale behind the enactment of the consumer protection Act 1986?

The Consumer Protection Act 1986 was enacted to provide for better protection of the interests of consumers and for that purpose to make provision for the establishment of Consumers Councils and other authorities for the settlement of consumers’ disputes and for matters connected therewith. It provides consumers the right to information, the right to choose, the right to grievances redressal, etc. 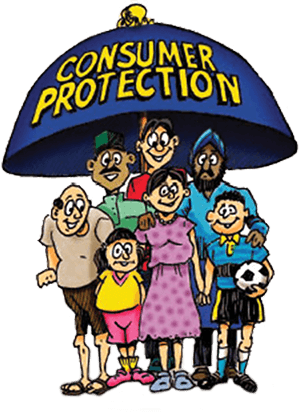 We have also penned down NCERT Solutions For Class 10th Consumer Rights to help the board-appearing candidates with the NCERT concepts and how to attempt the questions during the examination.